In late August, we packed up the camper and headed north to Niagara Falls. We left on Friday evening and stayed at Arrowhead Marina and RV Park in Schenectady, New York. It broke up the trip — which is helpful with kids — and let us get to our final destination a little earlier the next day. We got there around 6 P.M., set up, ate dinner, and checked out the campground a little bit. Our site was not ideal but it was fine for our short stay. Our fire pit was on the opposite side of where it should be. You can see how close the RVs are to each other in the background of some of the pictures. Our neighbor’s electric hookup is right next to our picnic table. 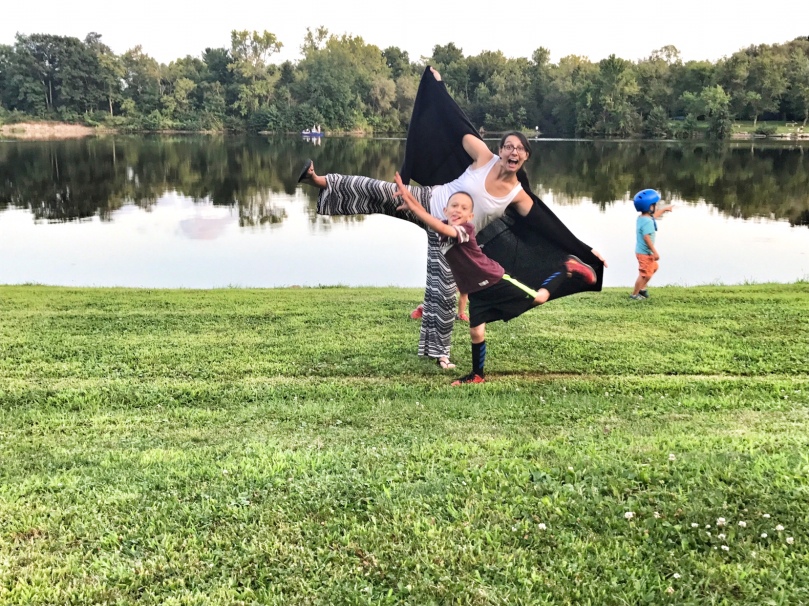 On Saturday morning, we headed up to Four Mile Creek State Park Campground in Youngstown, New York. We loved it here! Honestly, it’s one of the most talked about campgrounds when we reminisce. The campground overlooks Lake Ontario and has spectacular panoramic views. Behind our campsite was a big grassy area and a view of Lake Ontario. It had a great playground which was within sight of our campsite so we felt comfortable to let Carter go over and play by himself. The campground loops were perfect for riding bikes… Ben and Jack, who just learned to ride bicycles on our last camping trip, were constantly asking to ride around the loops.

We got to Four Mile Creek State Park Campground around 4pm, set up and took a walk over to check out the view of Lake Ontario. It felt like being on the ocean, it was so big. 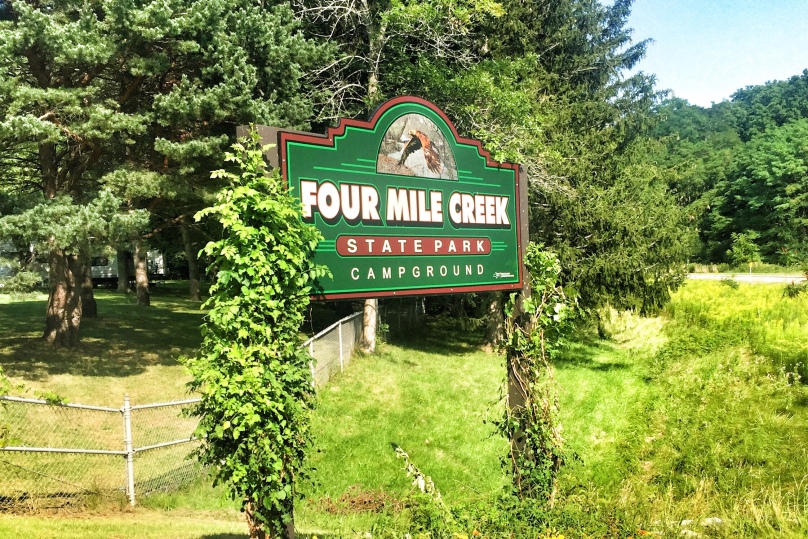 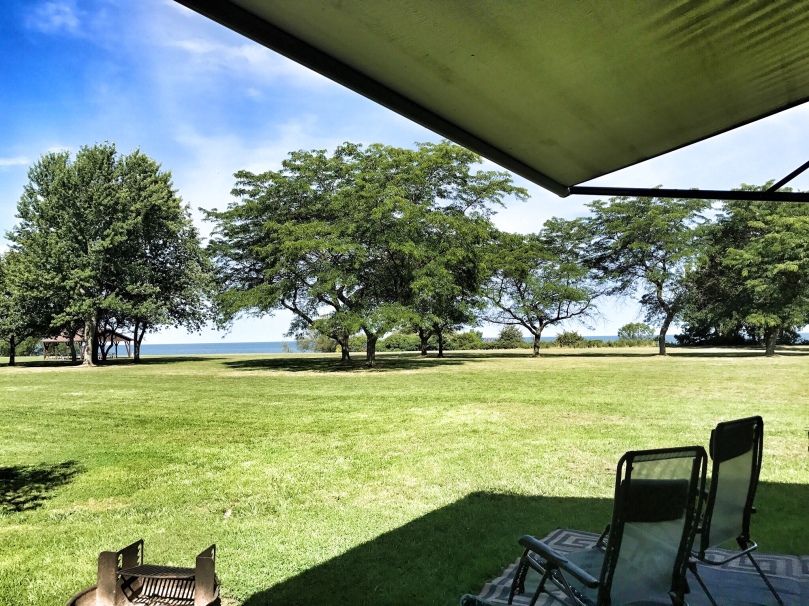 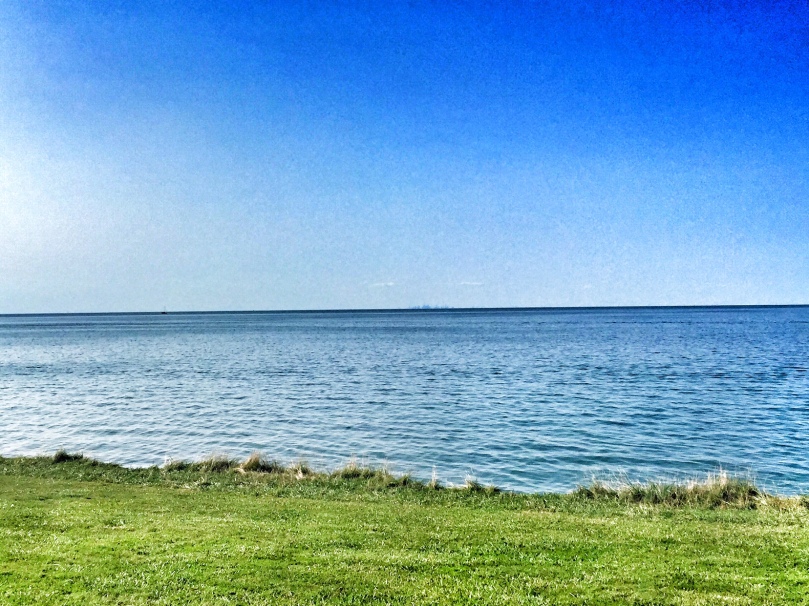 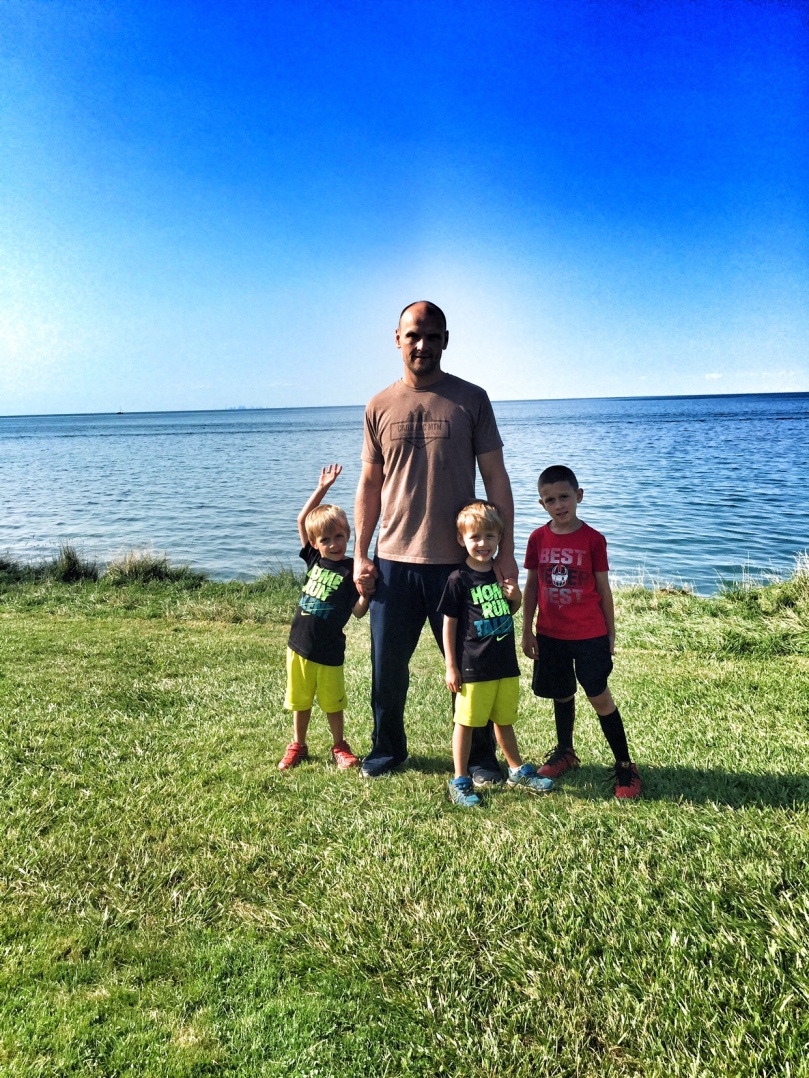 We played on the playground and then experienced our first Lake Ontario sunset.

On Saturday, we went to check out Niagara Falls State Park! When we were planning this trip, we talked about taking a day trip over to the Canada side, but ultimately decided it wasn’t worth it for us. We’d need to get passports or passport cards for the boys and crossing the border just wasn’t worth the extra stress. So, we stayed on the New York side.

First, we walked around the park and checked out Horseshoe Falls. Horseshoe Falls is the largest of the three waterfalls that make up Niagara Falls and it is on the border of the U.S. and Canada. 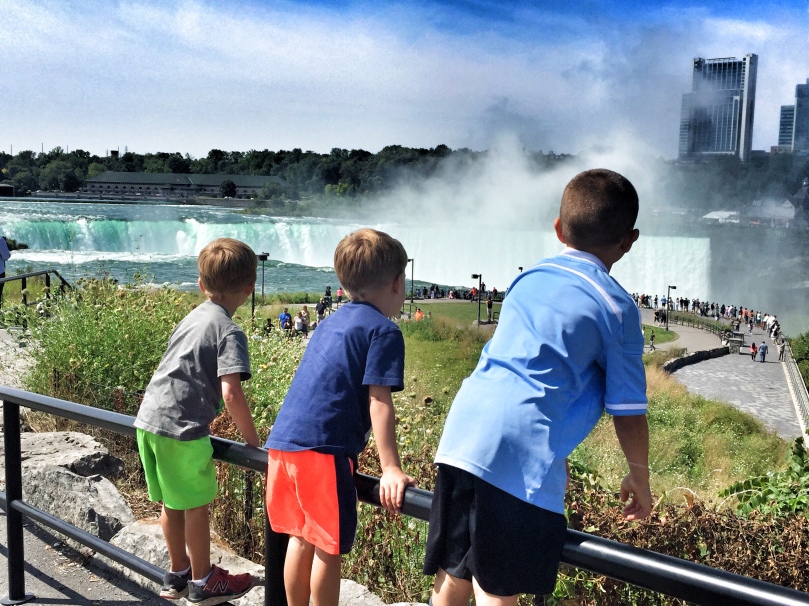 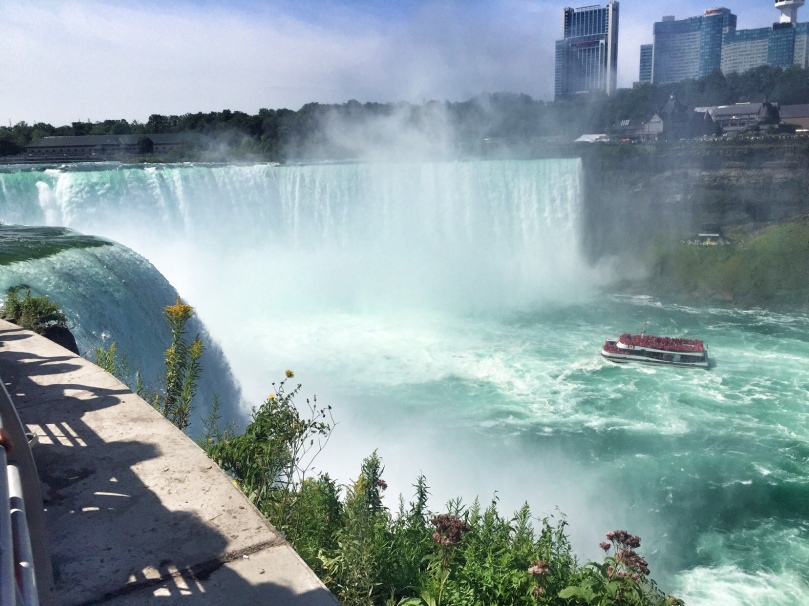 Then, we walked over to check out the other two waterfalls, American Falls and Bridal View Falls, which are entirely on the U.S. side of Niagara Falls. 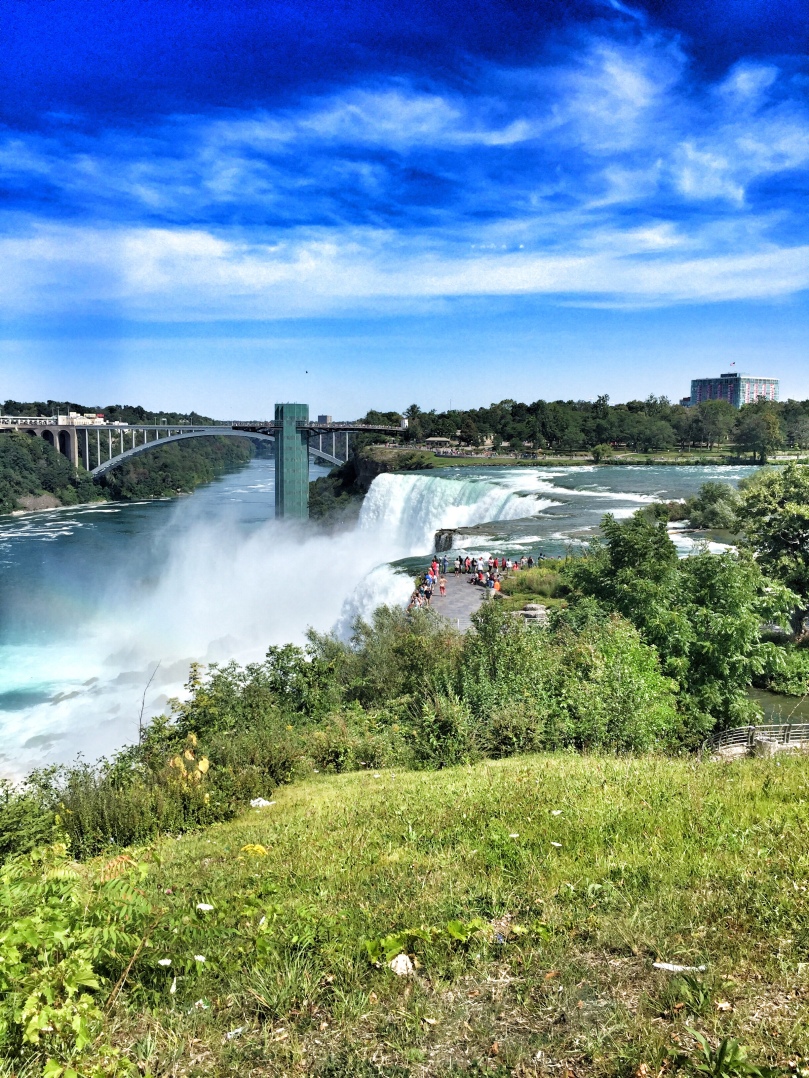 We went to the Observation Tower at Prospect Point which provides panoramic views of all three waterfalls.

We then boarded the Maid of the Mist which took us from the Observation Deck to the base of the American Falls and finally to the basin of Horseshoe Falls. It was a fun experience and we may have gotten a little more wet than we expected, but it was definitely worth it! 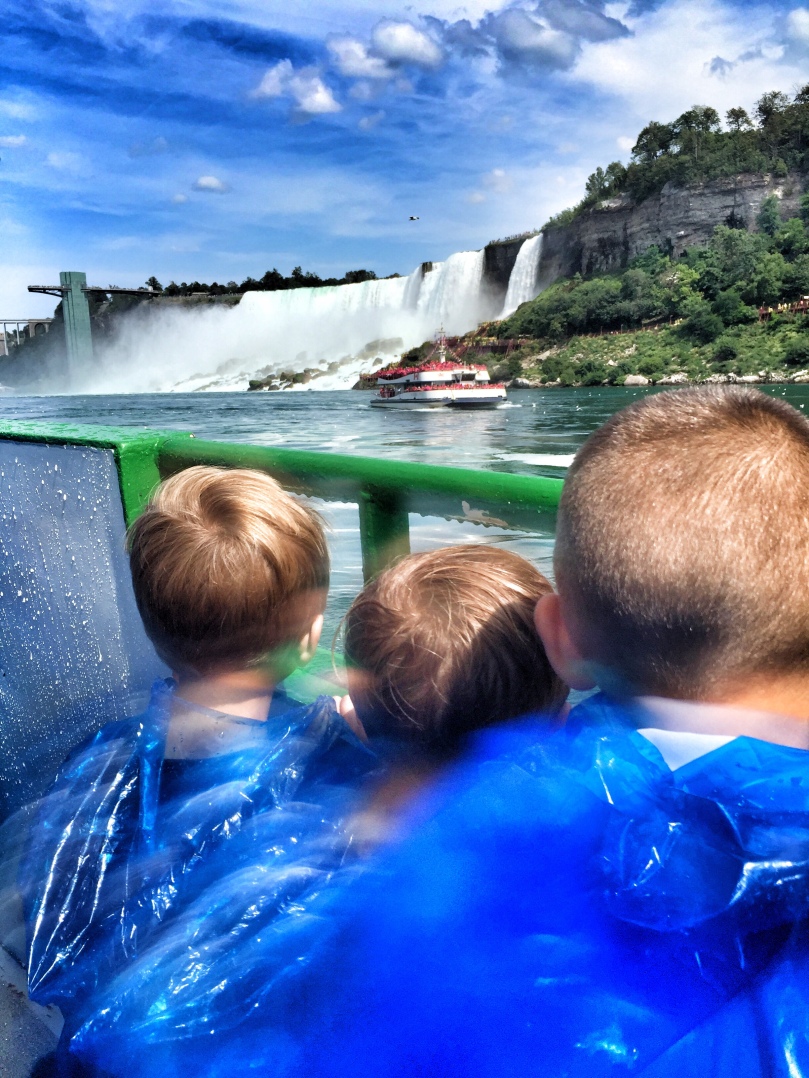 We went back to the campground for dinner and played around the campsite. We all went for a bike ride around the loops.

On Sunday, we were off to explore Old Fort Niagara. But first, we stopped for lunch at The Silo in Lewiston, NY, which is probably the coolest restaurant we’ve ever eaten at! The restaurant is in an old coal silo right on the Niagara River that dates back to the 1930s. It was turned into a restaurant in 1998. After lunch, we had some ice cream from The Silo’s Ice Cream Caboose, which is a retired train caboose originally built in 1890 that has been restored. I wish I had taken a picture of my ice cream… It was the largest sundae I’ve ever seen. And it was good. 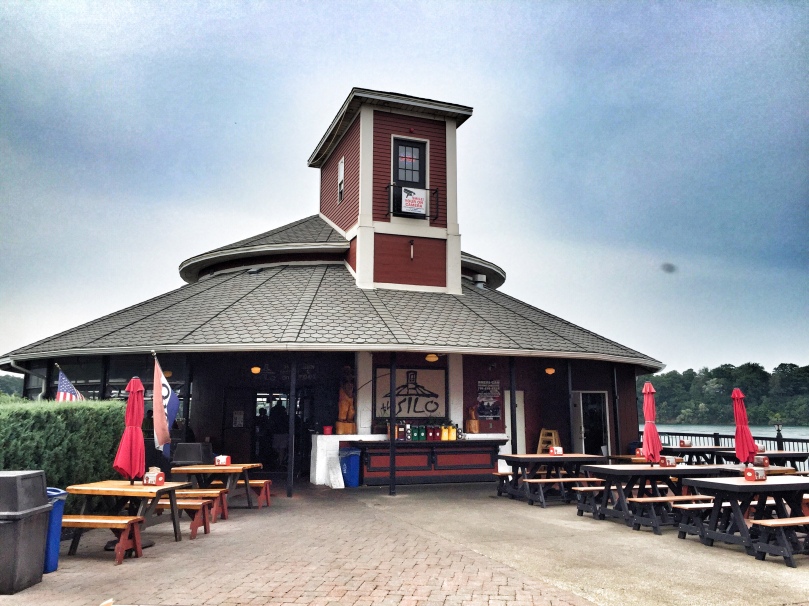 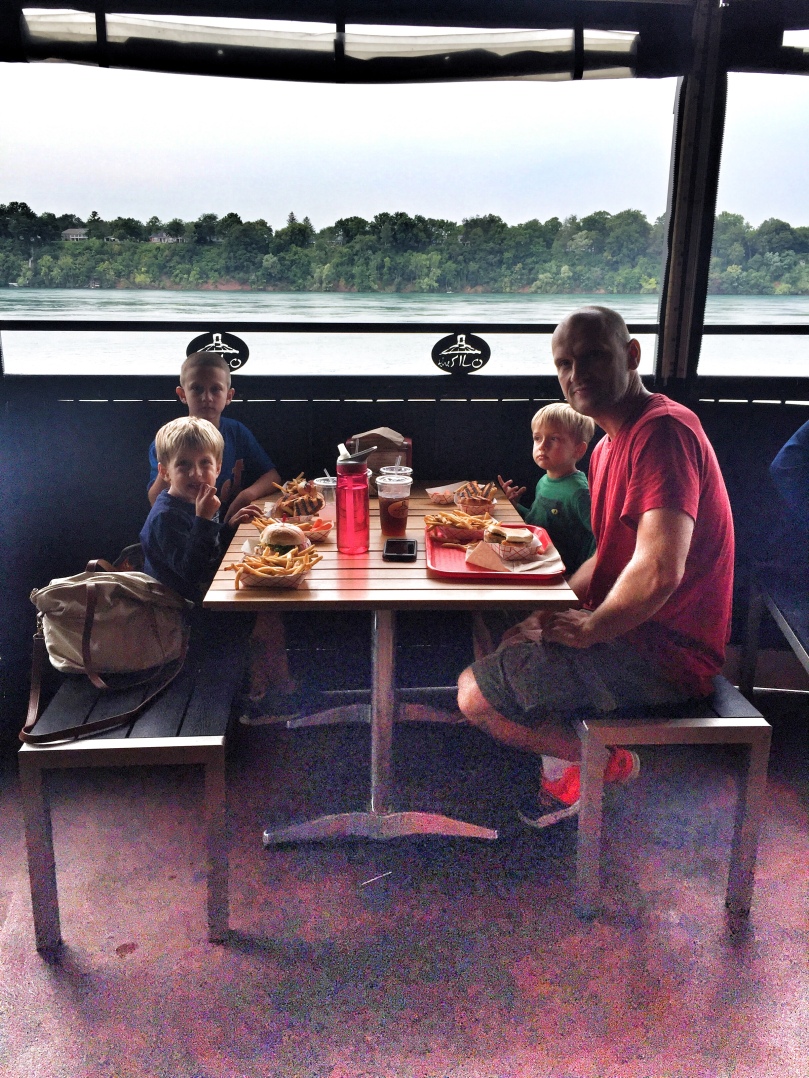 After lunch and ice cream, we made our way to Fort Niagara State Park to explore Old Fort Niagara. Fort Niagara is at the mouth of the Niagara River and controlled access to the Great Lakes during the Colonial Wars in North America. Fort Niagara’s location became less valuable after the completion of the Erie Canal in 1825, however it still remained an active military post. Three nations have held Fort Niagara — France, Britain, and the United States. The War of 1812 was Fort Niagara’s last armed conflict, thereafter it served as a peaceful border post and later became a barracks and training station for American soldiers during both World Wars. 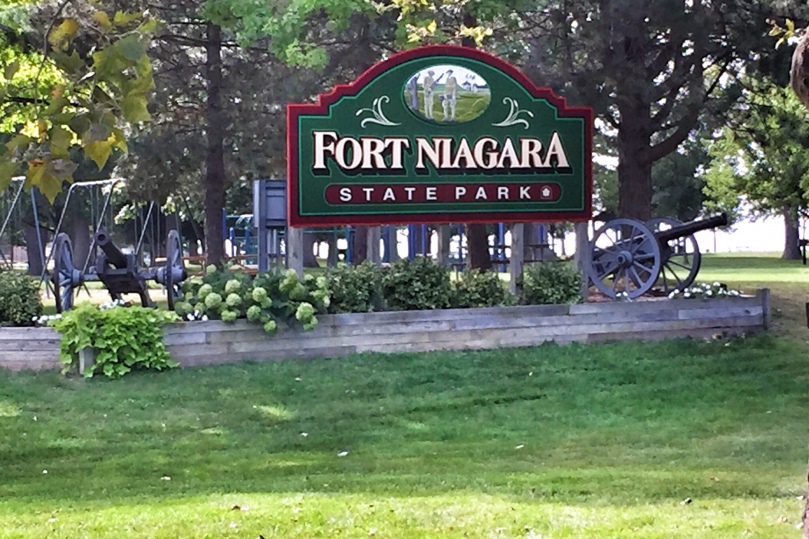 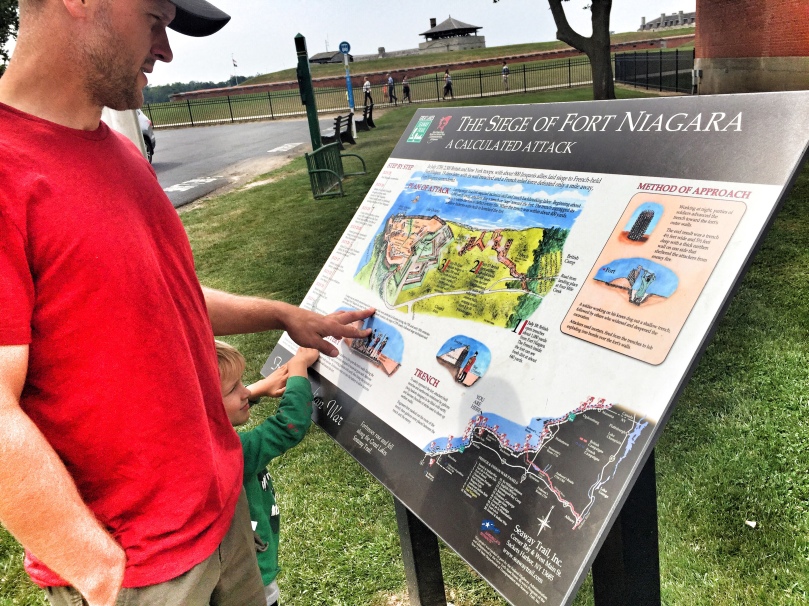 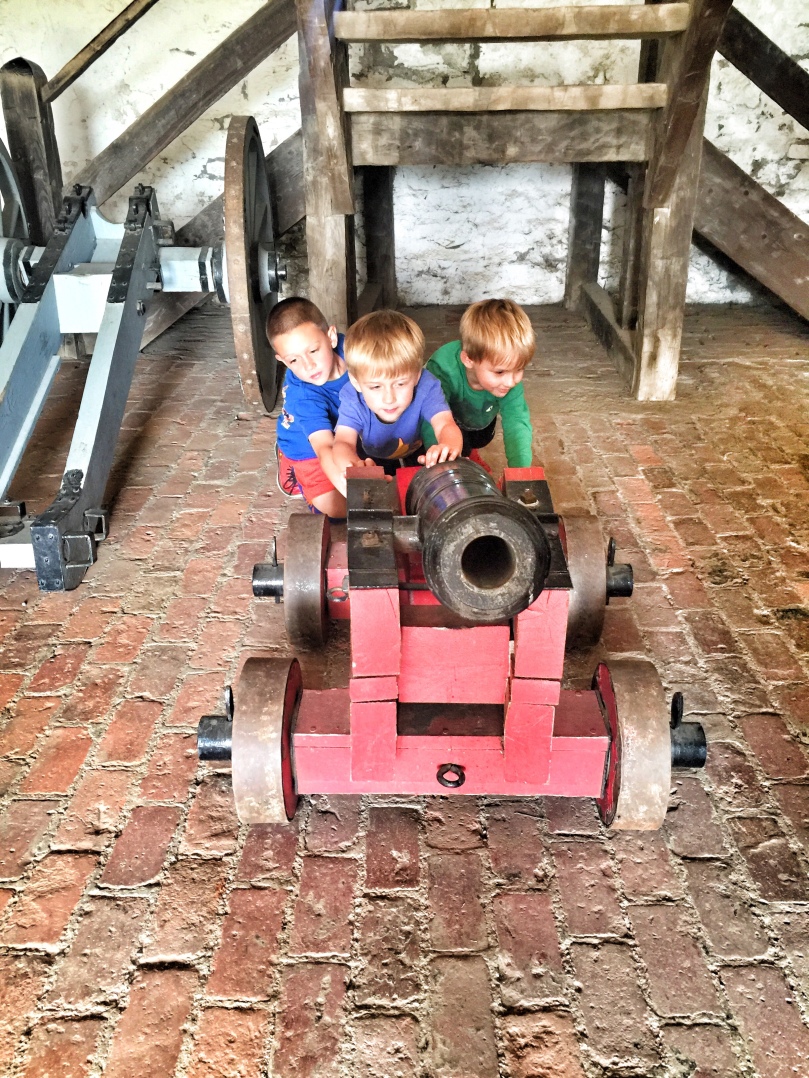 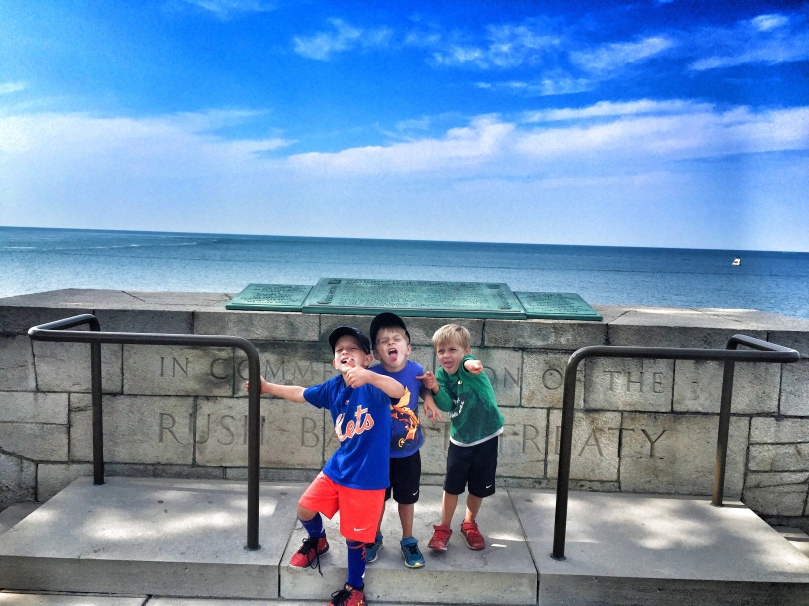 We ended our busy day relaxing with a campfire!

On Monday, we headed to Wilson-Tuscarora State Park in Wilson, New York to play on the shore of Lake Ontario. The water was cold, but the boys had a blast playing on the beach. 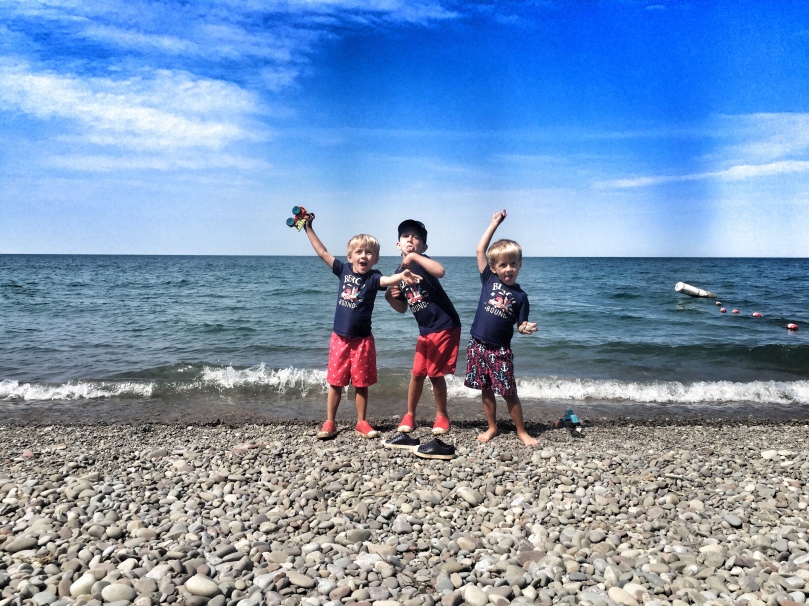 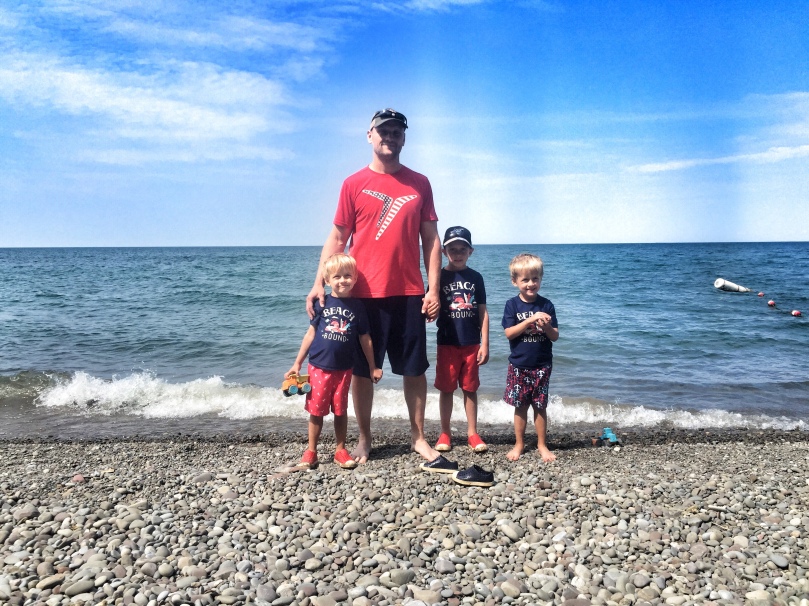 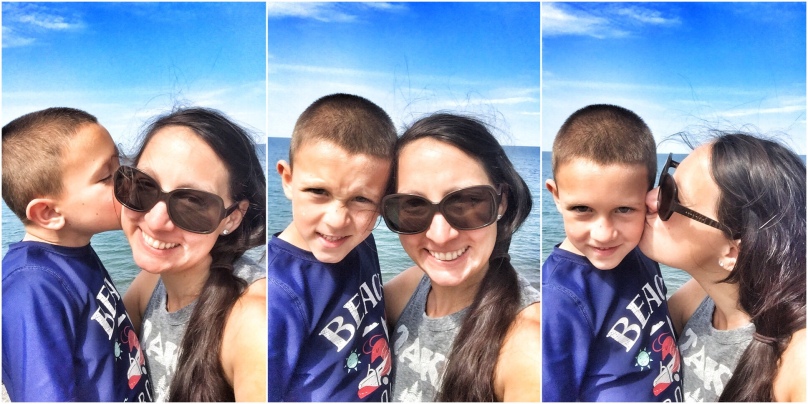 Back at the campground, we played on the playground, ate dinner, and Chris and Carter played wiffle ball with a bunch of kids and a few parents. We watched the sunset on Lake Ontario and had one last campfire before heading home the next morning. 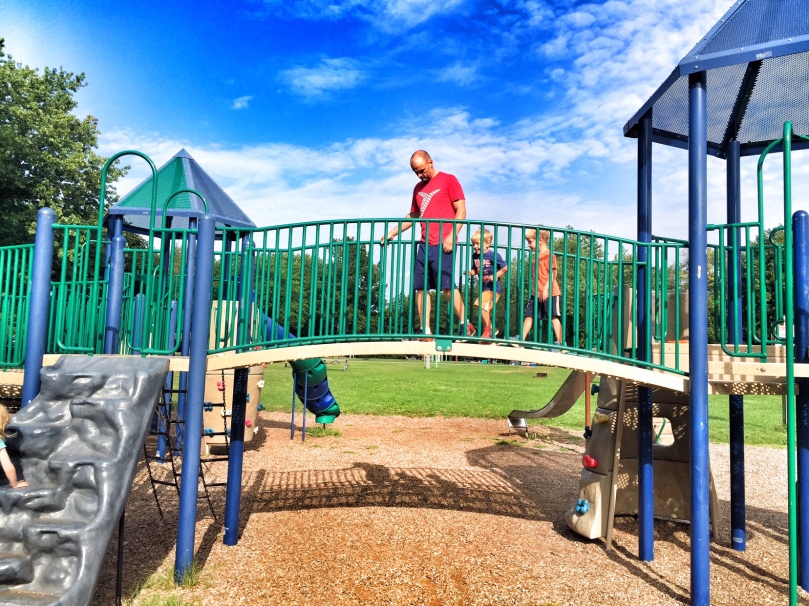 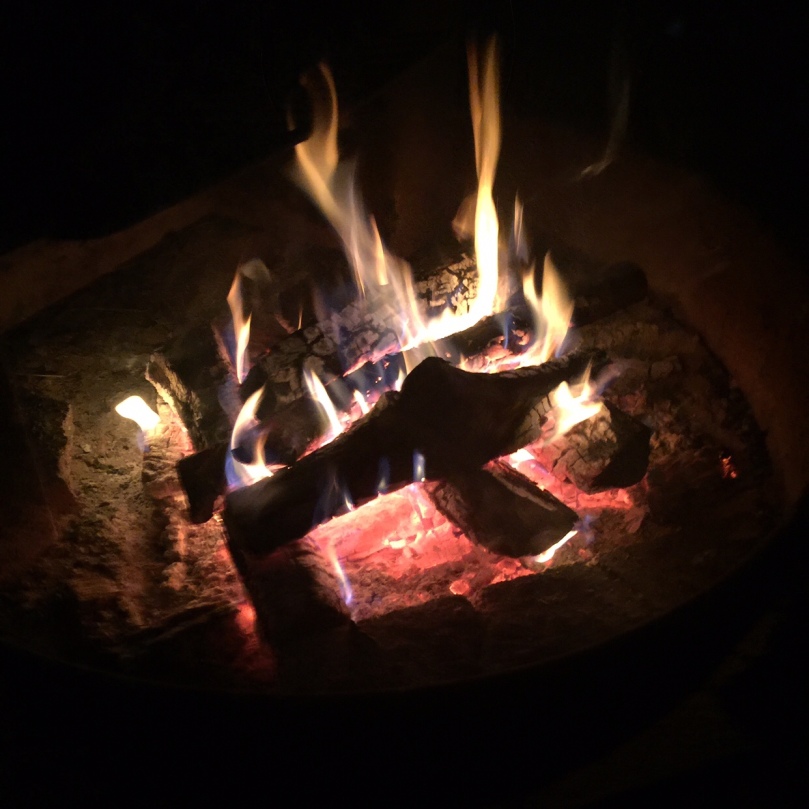 As I said before, we really enjoyed our stay at Four Mile Creek State Park and we will be staying there again this summer as part of our big summer trip! We even reserved the same exact campsite 🙂