If you missed Part 1, you can catch up on our first day and half in Shenandoah here!

After we finished our lunch, we headed to Skyline Drive in Shenandoah National Park. There are almost 70 overlooks on the 105 mile stretch of Skyline Drive with stunning views of the Shenandoah Valley.

We entered Skyline Drive at the Thornton Gap entrance station in Luray at milepost 31.5. Jackson fell asleep on the drive over so he missed out on our first view point, hence his absence from our family picture below. Our first stop on Skyline Drive was Hazel Mountain Overlook at milepost 33: 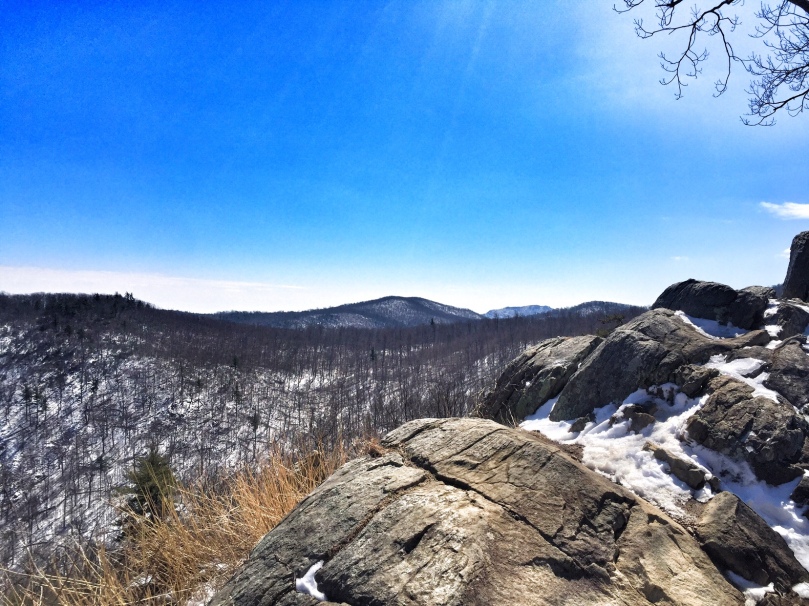 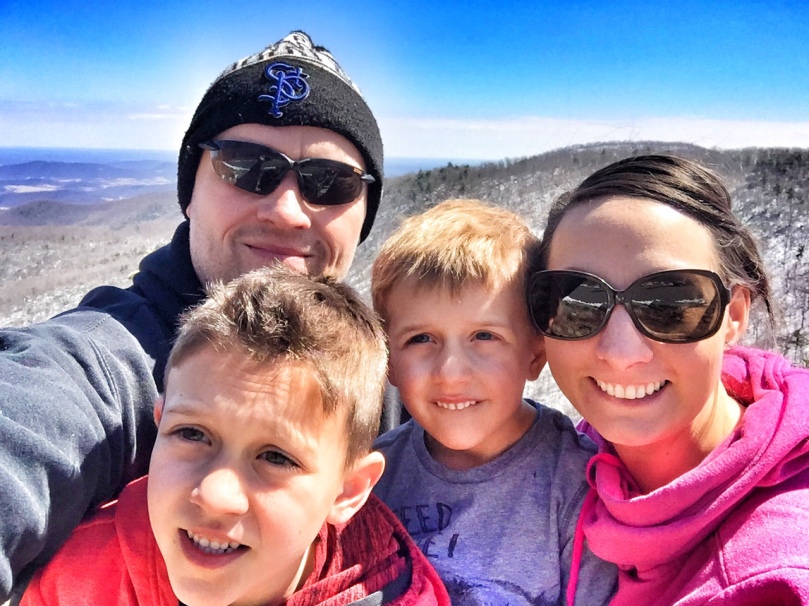 Our second stop was the Stony Man Overlook at milepost 38.5: 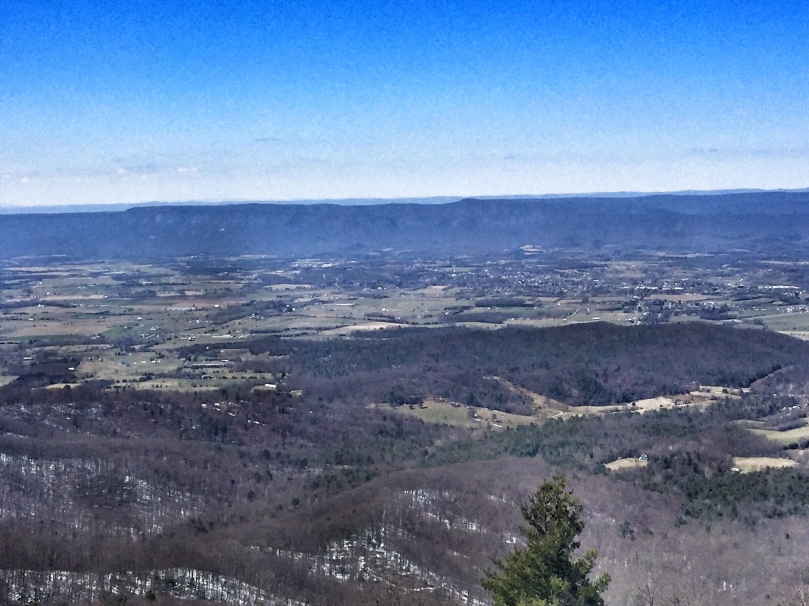 Next up was the Spitler Knoll Overlook at milepost 48:

Our next stop was the Byrd Visitor Center, around milepost 51. We spent forever in the gift shop while the boys picked out a souvenir. I wish I had taken a picture of them with what they picked — Carter chose a National Geographic Kids book about USA National Parks, Benjamin chose a bear stuffed animal (whose name we later found out is Benjamin!), and Jackson chose a small Shenandoah National Park notebook that has a hologram cover of wildlife animals.

We walked around the museum area but I don’t think the boys enjoyed it much… It was boring after visiting the gift shop. 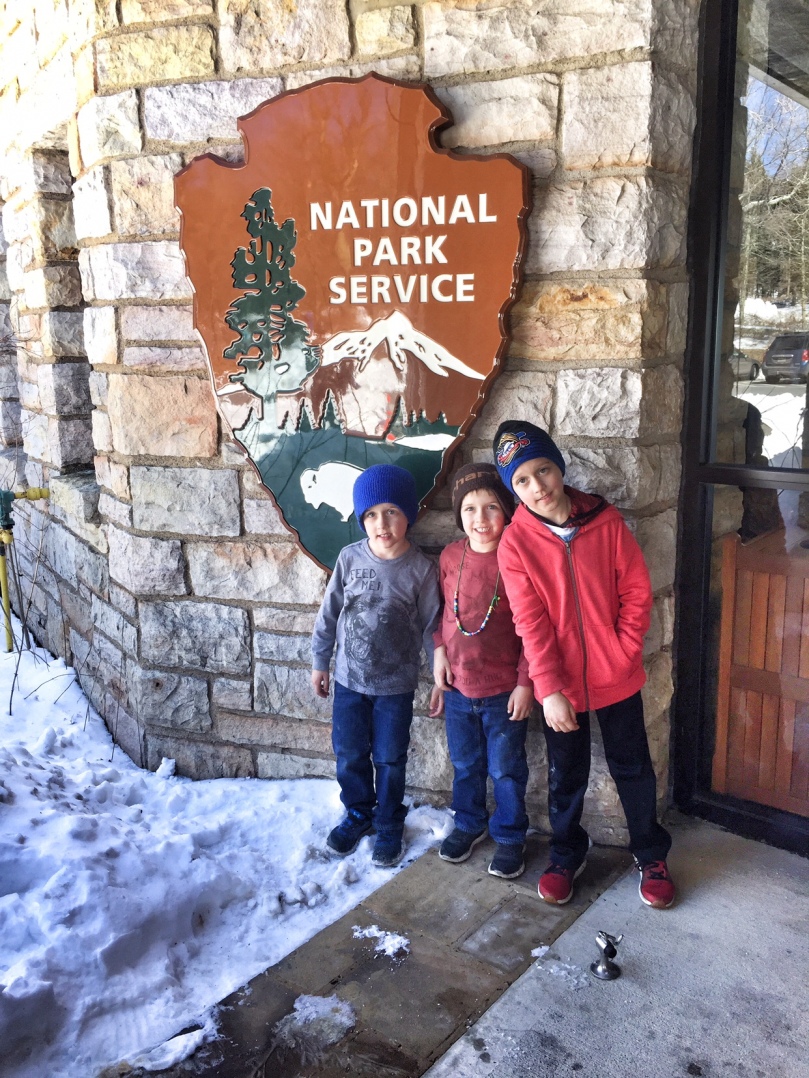 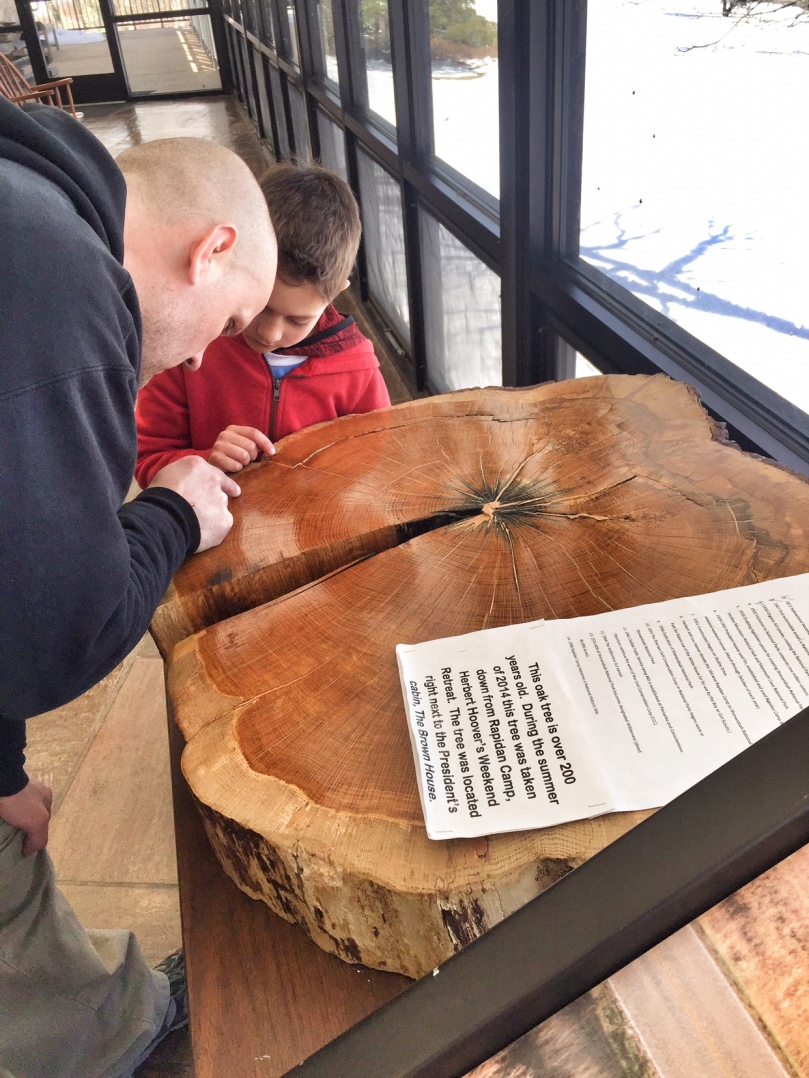 After the Byrd Visitor Center, we made our way back to the Thornton Gap Entrance station. We made a stop at Old Rag Overlook at milepost 46.5:

And our final stop on Skyline a Drive was Pinnacles Overlook at milepost 35:

On our way back to the campground we decided to go to a playground to let the boys play a bit. Chris and Carter played basketball while I took the boys to the playground area.

Chris made our first campfire of the season when we got back to the campsite. The boys asked to eat outside, which it was a bit too cold for, so we ate around the campfire to keep warm.

This camping trip was our first time camping in cold conditions (as in it was freezing cold!), so we discovered that our heat vents don’t distribute evenly when the boys woke up super early that morning and it was freezing in their room. We decided to set the boys up in our room on Sunday night where it stays plenty warm. Chris and I slept in the living area on the dinette and sofa. 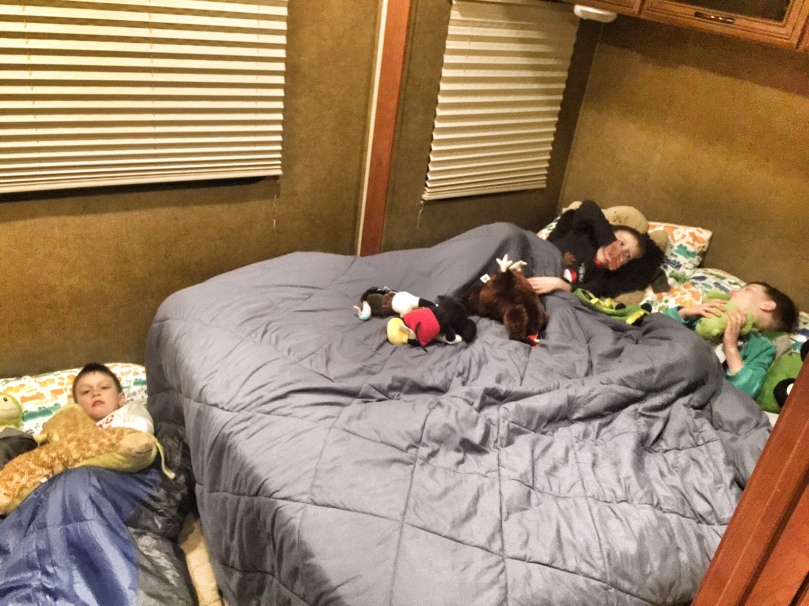 On Monday morning, we ate breakfast outside and hung around the campground. I cleaned up in the camper and got lunch ready while Chris and Jackson went for a walk to the river and Carter and Ben rode bikes and played with a neighbor camper. 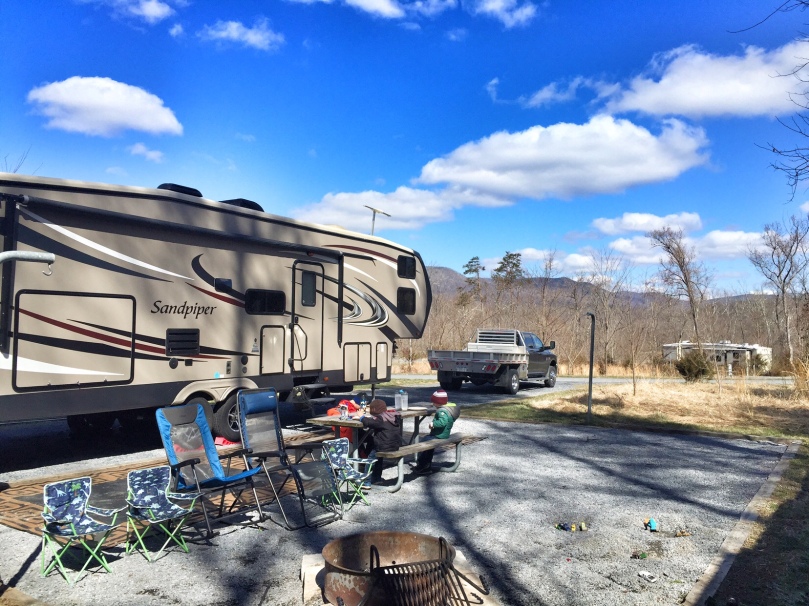 We had an early lunch and then headed back to Shenandoah National Park for a hike. We wanted to hike Hawksbill Summit again but decided against a longer hike. We then contemplated trying a new hike but ultimately decided to take them on the Stony Man Trail as the hike was familiar to us and we knew they could handle it. We opted for the shorter hike to the summit this time, only 1.6 miles round trip.

We usually have behavioral ups and downs while on a hike with the twins — crying, whining, complaining — but they were all so well behaved on this hike. It was a miracle and most definitely my favorite part of our Shenandoah trip. It was a bit cold but the sun was shining so it didn’t feel as cold as it was. The trail was snowy but well beaten. And the views were beautiful. Carter still talks about it… “Remember that view??” 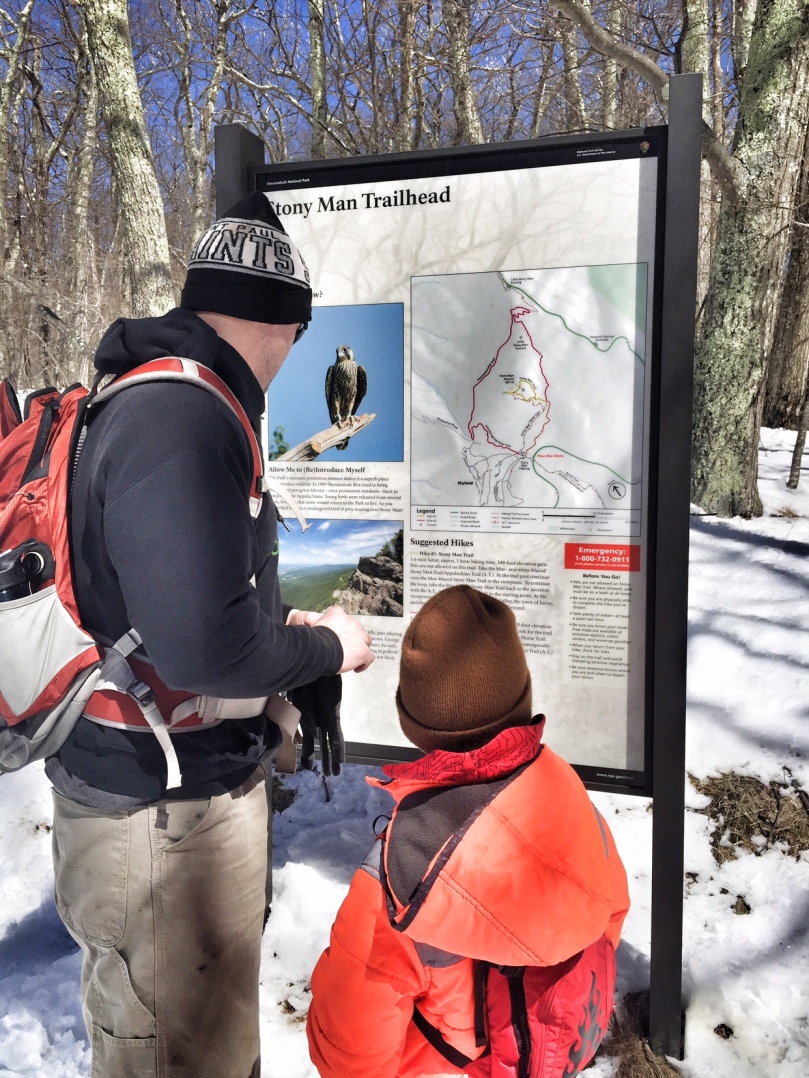 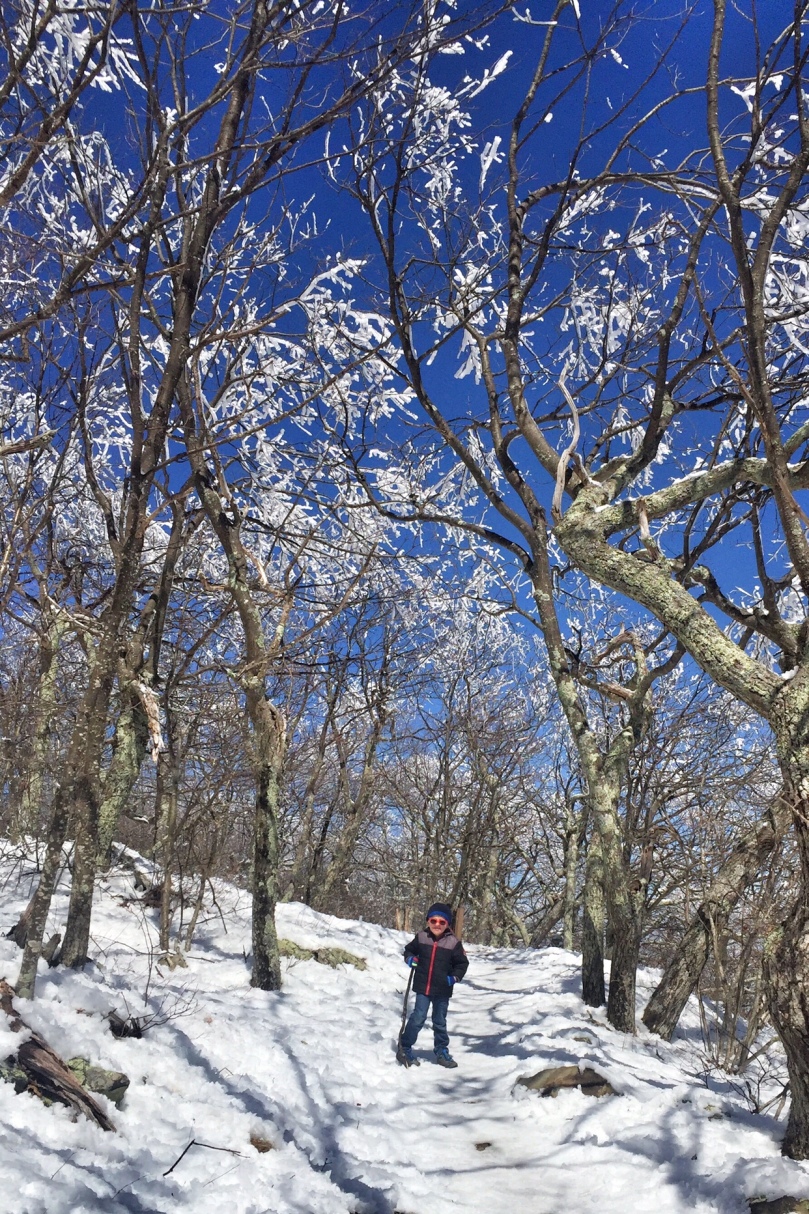 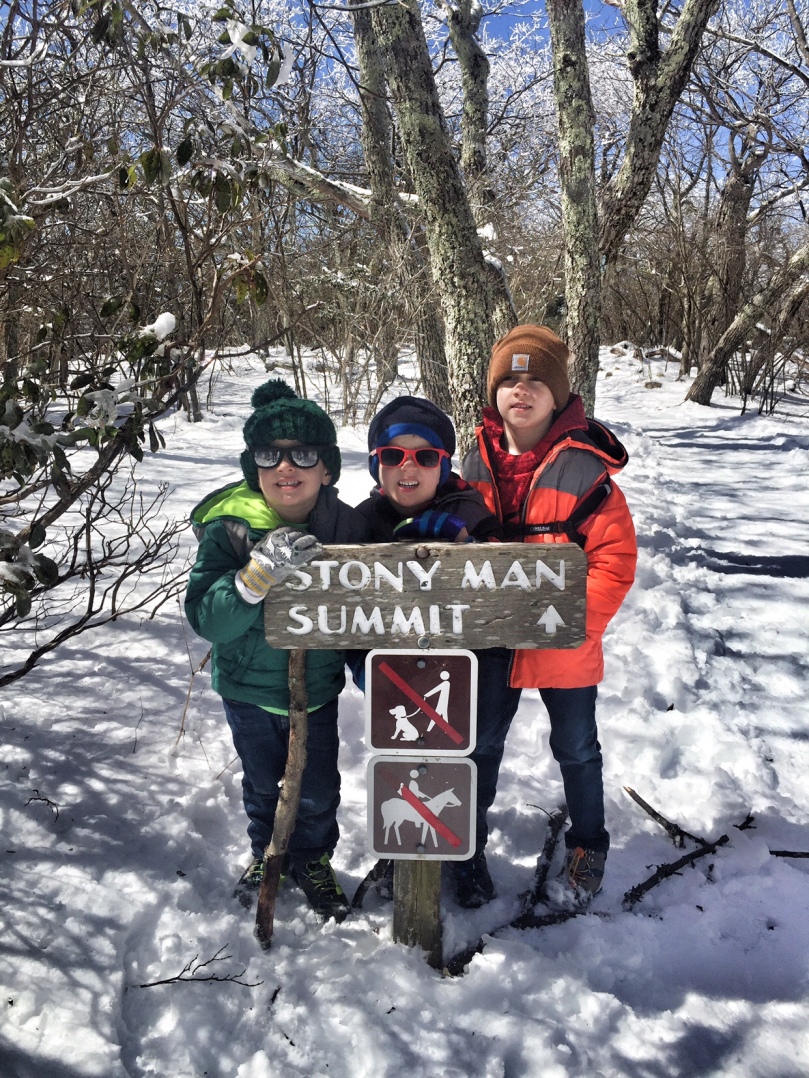 We were the only ones there when we arrived at Stony Man Summit, which allowed us to snap a few pictures without anyone else in the background! Eventually, people joined us, but we had the best spot 😉 We had a snack and took a bunch of pictures. 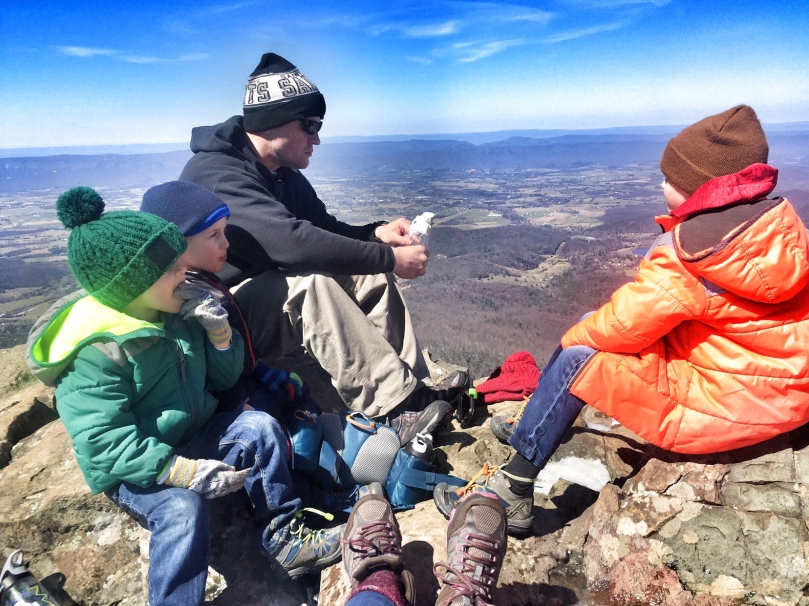 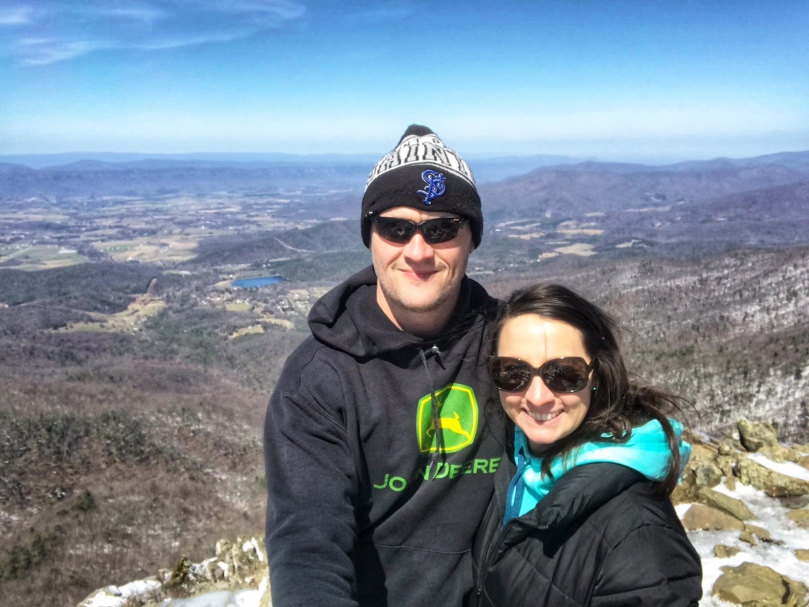 We headed back down the mountain, stopping at the secondary viewing area on our way. 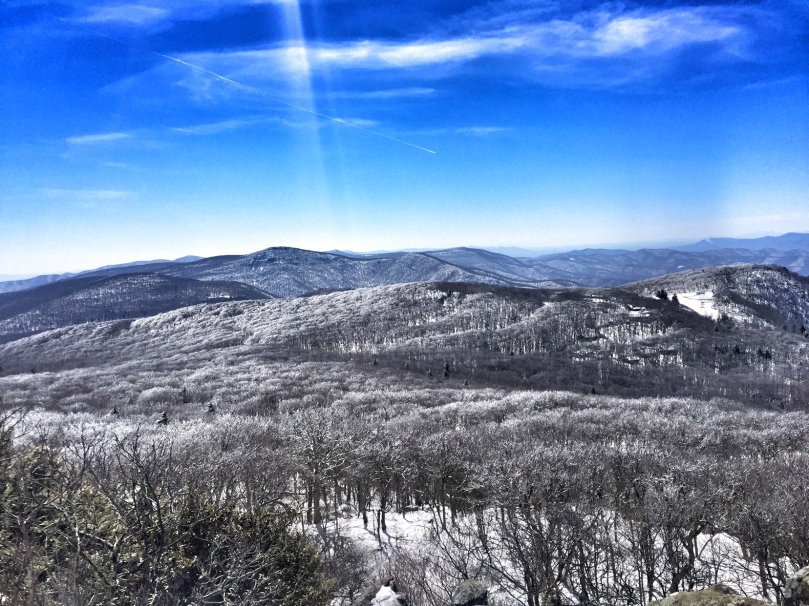 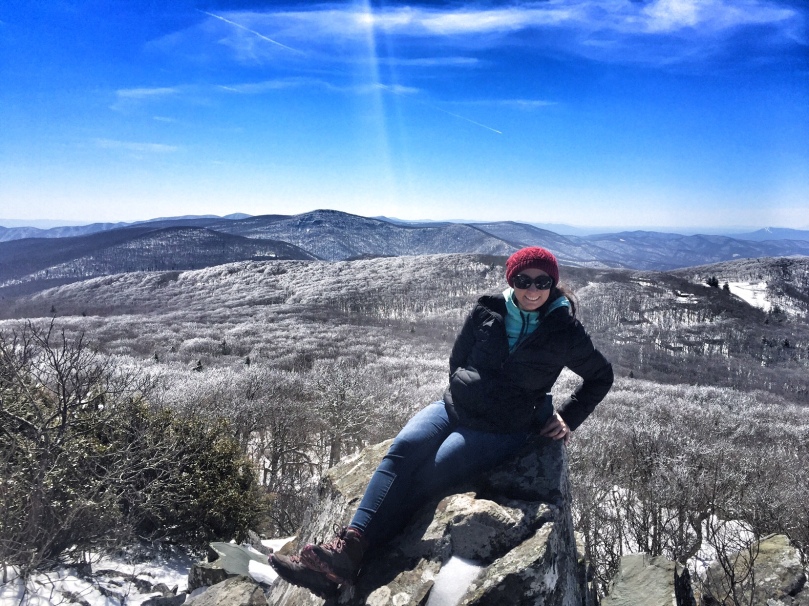 After our hike, we ran some errands and then headed back to the campground. We ate dinner outside and the boys played corn hole and kinetic sand.

After dinner, we took one last walk around the campground and headed to bed — the boys slept in our room again.

On Tuesday morning, we packed everything up and said our goodbyes to Shenandoah. We were off to our next destination!